Title: Britannia Hospital
Year: 1982
Runtime: 111 min
Director: Lindsay Anderson
Writer: David Sherwin
Actors: Leonard Rossiter, Brian Pettifer, John Moffatt, Fulton Mackay
Plot: Lindsay Anderson’s 1982 film Britannia Hospital is the third and final chapter in Mick Travis’s life journey — the first two being If . . . . (1968) and O Lucky Man! (1973). Britannia Hospital, a grossly underrated Anderson film, is a chillingly prophetic parable-cum-pantomimic farce of the arc and relentless downward spiral of the Randian post-Thatcher/Hayek/Friedman/Keith Joseph NHS and British parliamentary party politics since the ‘age of Sid’. Mick Travis, the schoolboy protagonist in If . . . . , conflicted Loadsamoney fallguy in O Lucky Man! has been transformed into a recuperated 32-year-old undercover journalist investigating the experiments of demented Professor Millar while making a legitimate documentary about Britannia Hospital. The mise-en-scène is the 500th anniversary of Britannia Hospital, a late 1970s NHS institution beset with all the problems of pre-Thatcher society: striking workers, corrupt and self-serving trade union leaders, kitchen cooks who won’t cook, and oranges served for breakfast that fail to satisfy the luxuriant appetites of the hospital’s upper-class residents, one of whom expresses disgust at someone’s chance remark that they might as well join the public residents. (“I didn’t spend forty years in India to end up with a lot of wogs.”). To make matters worse, the hospital is besieged by demonstrators who want a VIP patient — an Idi Amin figure — evicted, and deranged consultant Professor Millar, the brilliant Graham Crowden, a Dr Frankenstein character who is freezing assorted human body parts intending to electrify their composite into existence. “Oh, dear: the head, defrigerated, has wilted; a replacement today must be found.” Whose head will it be? The day’s problems are compounded by the arrival of the Japanese ambassador for the opening of the Millar Centre for Advanced Surgical Science, funded by Banzai Chemicals of Tokyo, and Her Royal Highness—“HRH”—the Queen Mother. According to Lindsay Anderson, the film had its origins in 1975 with a newspaper story about the "siege of Charing Cross Hospital, when there was a big demonstration against fee-paying private patients led by a union official known as Granny Brookstern. This immediately struck me as absurd. If you stand outside a hospital and stop ambulances going in the name of humanity you are involved in a wonderfully absurd paradox. The story got even more wild with accusations that Granny Brookstern and the Labor Minister of Health had themselves been private patients; and so I started building up a private scrapbook of newsworthy absurdities." Anderson said he was inspired by Amiel's theory that the only true principle of humanity is justice. "The man who would today say that liberty and equality are bad principles is a brave man but perhaps a necessary one since, unless they include justice, they are pernicious and self-destructive. That is at the heart of 'Britannia Hospital,' though I hope it's not a preachy film but a parable. A parable is a heavenly story with a earthly meaning. I hope this is an earthly story with a heavenly meaning… "The film ends with a question mark, not a solution, and people don't like that. They want to be let off the hook, and this film impales the audience on rather a large hook. I think that if we are going to find solutions, we're not going to get any help from God, or any pre- sold political notions. The big question remains whether we are good enough or intelligent enough to survive."
Poster: 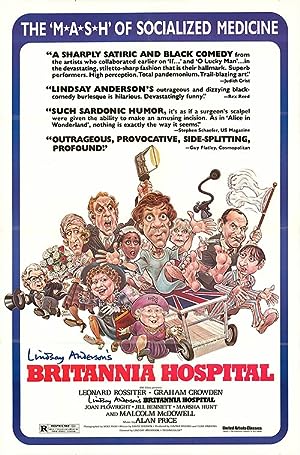